Kenny Wayne Shepherd has lived more than half of his life in the spotlight.

He is widely considered to be one of the best blues/rock guitarists (James Brown once referred to him as 'one of the wonders of the world') and he has had six No. 1 blues albums and a string of No. 1 mainstream rock singles.

Utter the phrase 'young blues guitarist' within earshot of anyone with even a cursory knowledge of the modern musical vanguard and the first name they are most likely to respond with will be Kenny Wayne Shepherd. Still barely in his 30s, the Louisiana born axeman and songsmith has been selling millions of albums, throwing singles into the Top 10, shining a light on the rich blues of the past and forging ahead with his own modern twist on a classic sound he has embodied since his teens. He met Stevie Ray Vaughan at 7, shared the stage with New Orleans legend Bryan Lee at 13. As an adult, he continues to create genre-defining blues-infused rock n' roll.

Kenny Wayne Shepherd's How I Go not only serves as a strong reminder of the chops that caused Guitar World to place him right behind B.B. King and Eric Clapton on their list of blues guitarists, but it's the strongest indication yet of his gifted songwriting talent. The album pairs Kenny's deeply soulful and impassioned takes on classic material like Bessie Smith's Backwater Blues, Albert King's Oh, Pretty Woman and The Beatles Yer Blues alongside the strongest writing and co-writing of his career thus far.

Let's not forget that Kenny co-wrote Blue on Black very early on. The song was #1 on the Rock Charts for 17 consecutive weeks. All of the accolades heaped upon his playing are well deserved and well earned. 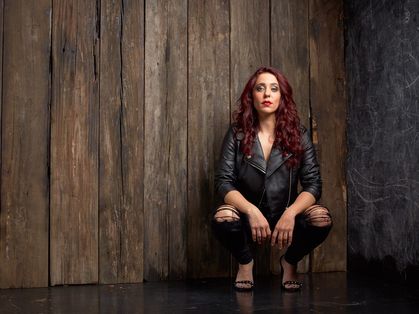 Nicole's distinctive, inventive bass work - which resulted in her becoming the first woman to win the Blues Foundation's 2014 Blues Music Award for Best Instrumentalist, Bass - is the product of years of intensive roadwork. Although she had no experience with the instrument when she became Trampled Under Foot's bassist, now she can't imagine life without it.

Her new album Cry No More has been nominated at this year's Grammy's for Best Contemporary Blues Album.