Packing on the pounds after writing a PhD, Beau’s running again. He’s also back in the shed; fixing stuff, making things, tinkering. For most of us, running was once a form of survival, hunting- or being hunted. Now, it can be as meaningful, or meaningless, than any other aspect of life. Running for Beau is practical- it gets him places, yet like a lot of runners, it's deeply embodied. He defines himself by where his feet take him, thinking about his other forms of life as he runs. Combining a need to get rid of the gut, to run again, and spend some quality time in the shed, Beau will run a mile an hour around his perfectly mile-long block. In between he’ll do as much as possible, likely becoming the fullest, meaningful, most trivial day of Beau’s life.

We worked with a very precise plan on some of the most incredible Calisthenic Street Workout Scenes with the Australian Calisthenic Athlete “Simonster” on the streets. With Simon Ata we shot straight Bodyweight power moves all over the state of Saxony. He is a master of the Plance and Handstand and the Hollowback, but also other moves like a super high backflip and Hollowback which is one of his special moves. On the music I worked with the composer Oliver Patrice Weder from Amsterdam. I flew over and we composed to every move of Simonster and to the dynamic of the shot. It is also the first time I used no Invisible Cuts or other Effect Editing and worked with longer, magical shots. We shot 7 days with breaks inbetween to get to the result you see in the end. This is a free project supported by the state I am living in. (Soundtrack was created by Oliver Patrice Weder)

A dream team of six elite climbers mount an expedition to one of the world's last great climbing frontiers: the remote frozen towers of Antarctica. Jimmy Chin and Conrad Anker tackle a new route on the 3,600foot Ulvetanna; Savannah Cummins and Anna Pfaff summit the towering Holtanna; and Alex Honnold and Cedar Wright make a harrowing and hilarious blitz of 13 different spires spread across the ice field, including one pitch that Honnold calls "the scariest I have ever led." Queen Maud Land the name of this icy region showcases a stunning, rarely visited wilderness, and the suffering and vision needed to climb at the bottom of the world. 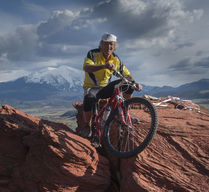 The Berghaus Dragons Back Race is the hardest 5 day mountain race in the world! Therefore when I found out that my friend, Huw Jack Brassington (one of the craziest people I know), was planning on running it, I knew that this was going to be a great opportunity for me to make my first Documentary.

Having not achieved a commission in time for the start of the race, I almost had to give up on the project. But instead I came to an agreement with the race organisers that I would work for them filming the race, in exchange I would get access to additional footage. As it turned out I am so glad that I persevered with the project as I got to witness the most determined human being that I've ever met push himself to his very limit, both physically and mentally!

Whilst traversing the spectacular mountains of Wales Huw Jack Brassington had to contend with the surprisingly hot Welsh weather, injury and the ever looming possibility of failure - which is a word that had hardly ever entered his mind before. This amazing journey, mixed in with Huw's unique sense of humour, and his glass half full attitude were the perfect ingredients for an amazing story.

If the audience, whilst watching this documentary, feel a fraction of the inspiration that I felt when shooting it then I will have succeeded in what I set out on achieving.